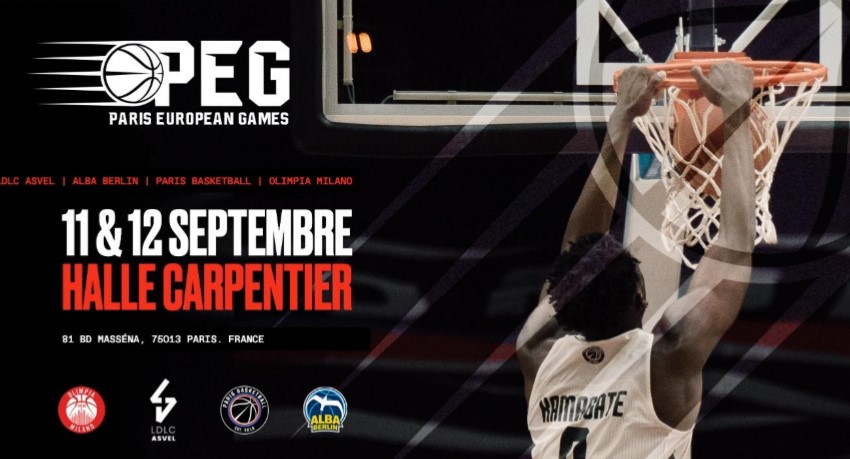 The Paris European Games tournament kicked off this Saturday, and Eurohoops Scouting was present covering the event. The event conducted from September 11-12 at the Halle Georges Carpentier in Paris, France, and the Parisian spectators were able to watch Euroleague level teams since the 2013/14 season of Nanterre 92, as they had the chance to watch Olympia Milano, Alba Berlin, LDLC ASVEL and their team of Paris Basket.

Wembanyama was the attraction of an ASVEL team that participated in the first PEG and finished with a record of one win for one loss. Victor has an outstanding physique with a height of 7’2″ (and very, very long arms) but especially a disconcerting mobility for a player of this size. During the tournament, he proved that he could become the leader of this defense in the short/medium term with blocks, rebounding, good defensive reading and quickness in his movements. Offensively, Victor is capable of amazing things for a player of his size, able to dribble, and even keep the ball on some two-man shots thanks to an already well-developed handle. His shooting motion is again impressive, very clean for a player of this size and his height allows him to shoot over tall players. Close to the circle, Victor has a very good touch on the ball which allows him to score on alley-oop as well as on moves by putting the ball on the floor. Mentally, Victor sometimes lacks accuracy, but let’s not forget that he is still very young and that he discovers Euroleague for the first time. It’s important to note that he always plays with a smile, it’s obvious that he enjoys being on the court and playing basketball.

Standing at 6’0, the young point guard of ASVEL has all the qualities to become the boss of a team, despite not being at his best during the weekend. He has a body which we can easily imagine him putting more muscle to and has impressive speed with ball in hands. His contribution is mainly offensive with a good management of the tempo, he has the capacity to put rhythm and to fluidity an attack with good passes. Moreover, Strazel is able to shoot 3pts sometimes even far behind the line or to penetrate in the racket to finish near the circle. On defense, he needs to pass a mental step. Although he doesn’t have great physical abilities, he tends to lack concentration or even desire (?) whereas when he decides to really defend, he is able to be a problem for players mainly of his size. Against more experienced players, he had a tendency to lose control of his concentration and to make silly mistakes during this week-end.

Doesn’t a tall, blond German who can shoot remind you of someone? Before we get into “messy” comparisons, let’s talk about the physical attributes of the young Alba Berlin interior. 6’11” for 183 lbs, Christoph has the physical frame to add muscle and will surely need to bulk up to compensate for his lack of athleticism, as we’ve seen him suffer against more bouncy interiors than him. Offensively, Tilly has clean shooting mechanics and is able to drive into the paint to finish close to the rim. Even if he was not at his best during the tournament and could not show the extent of his range, we imagine his impact will be greater with more weight and experience.

After having participated in the training camp of the French team for the preparation of the 2020 Olympics, could this be the year of the explosion for the former resident of the Orleans training center? After a mixed first match because of fouls against Milan, Coach Prat’s player proved his arsenal against Berlin. From the top of his 6’11”, he has an athletic and long physical structure, he is able to jump very high, but especially, he has a very good mobility. Moreover, on the rebound, he is able to take the good position and block his defender behind him (even if it is not always easy against players more on the ground than him) and to go and get the ball. Offensively, Kamagate has only one word: the dunk. He can finish on an alley-oop as well as after a good pass in the rack (very good relationship with his outsides) or on a slam-dunk but be careful not to underestimate his good touch which allows him to finish at mid-distance. His defensive impact is also important to underline, because with his mobility and versatility, Ismael is very active sometimes maybe too much and commits avoidable fouls that force him go back to the bench.

Back from the Summer League with the Boston Celtics, Juhann finds his Paris Basket team with the same backbone. He is the most physically developed of the players mentioned above and still has room to add muscle mass. Standing 6’5″ tall, Begarin is an elegant player with ball in hands, his handle allows him to drive to the rim or find his teammates. Also able to play without the ball, it is an axis that he will have to continue to develop to make a place in the NBA roster with the Celtics. To define his contribution in the game, the word “complete” seems appropriate even if for example his shooting is not yet efficient enough (although progress is to be noted on the gesture), often present on the rebound, he manages to impose himself thanks to his athletic qualities. Juhann is also an imposing defender on the ball carrier, but needs to make progress off-ball, he tends to release his attention on the ball and can miss assists or closeouts.