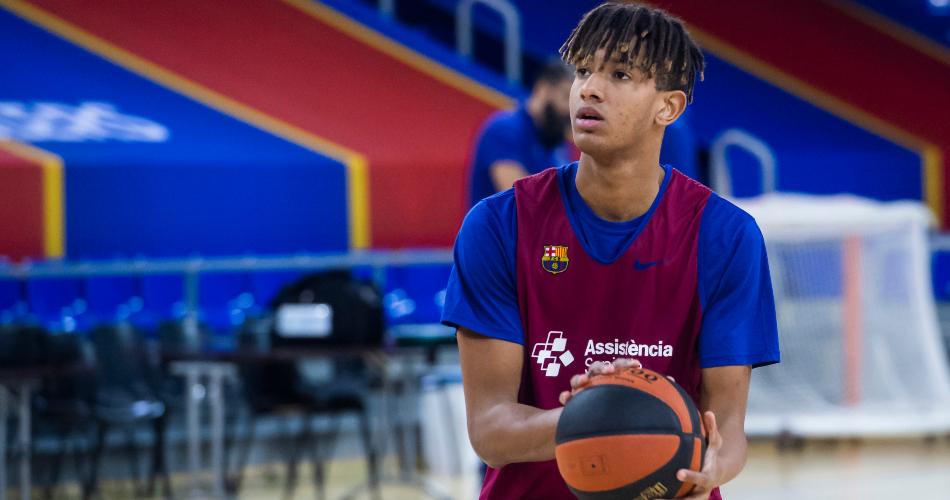 Born on June 21st, 2003 from a Colombian father and a Spanish mother, Michael Caicedo has quickly become one of the hottest names in the international basketball landscape. Originally from Inca, a city in the central-north part of Mallorca, Caicedo took youth competitions by storm, winning individual and team awards.

Among his achievements, he was elected MVP of the Adidas Next Generation in Valencia in December 2020 and he won the U16 European Championship with the Spanish National Team in 2019, beating France in the final.

On the 9th of January 2021, while he was part of the Barcelona B squad who competes in the LEB Silver League, Michael made his debut for Barcelona in the Endesa League, becoming the fifth-youngest player to step on the court in the history of the Club.

Fast forward to today, Caicedo made his Euroleague debut in the game against Maccabi Tel Aviv and he has been a steady presence on Barcelona’s roster, showcasing glimpses of his talent and athleticism. We interviewed him:

When did you approach the game of basketball? What made you fall in love with the game?

I played football until I was 12 years old, that’s when my family recommended I’d try basketball. This was the turning point, I realized that I really love the game and I also made great friendships in my first year.

You are only 18 but you have already found some playing time in the ACB and Euroleague, how does it feel and what stood out to you about battling with the pros?

The difference between playing with the U18 team and playing for Barça’s first team is huge. The game is much tougher in every aspect but being able to practice every day with the best players in Europe is making me a better player on both ends of the floor. Moreover, my teammates have done a tremendous job in helping me on a daily basis to get used to this level of competition.

Barcelona is considered one the best Clubs in the world and one of the frontrunners to win the Euroleague, what have you learned in terms of dealing with pressure and expectations? Is there a veteran on the team that you look up to?

The pressure never scared me, I always enjoyed being an important player.

The expectations in a club like Barcelona are always high no matter what, we work to achieve the best results. Nikola Mirotic and Rolands Smits give me a lot of advice, I also talk a lot with Sergi Martinez as he has gone through the same process as me, although overall I would say all of my teammates have helped me one way or another.

Some of my strengths are the intensity and aggressiveness I bring on the court. I’m never satisfied, I want to get better with every workout. I still have aspects of my game to improve like shooting and adapting to some in-game concepts. These are things I’m working on every day.

Who is your role model and why?

My role models in life are my parents because they always taught me not to give up and they believed in me. In sports, I’ve always liked Paul George because I really like the way he plays.