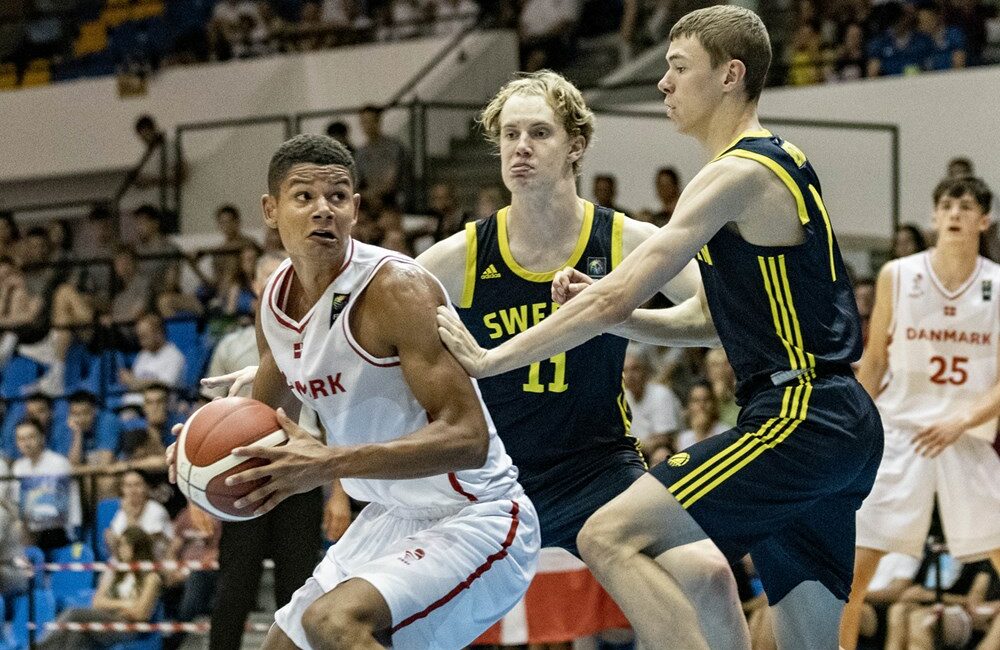 With a handful – well, almost two handfuls – of college offers in his pocket and an explosive start to his career in Denmark’s top division, Marqus Marion has been one of the main figures in the early season in Europe. Standing 6’9”, this athletic forward has been making the rounds in Denmark, after a breakthrough summer, helping his Under-18 national team reach the final of the European Championship – Division B.

Born September 1st, 2004 in Skovlunde, a little town with a population of 12.000 habitants in the outskirts of the capital city of Copenhagen, Marqus was a quiet and happy kid interested in playing football (soccer) with his friends. It took his parents several attempts for him to switch to basketball, which he did when he was 8 years old and never looked back. His parents, Nanna and Tony, are both former basketball players in Denmark. Tony is from Chicago, Nanna is Serbian, but was born and raised in Denmark and both have had the opportunity to coach their son at different times. Despite that, Nanna tells me she “was really hard on him, and didn’t want anyone to think that Marqus was freer because of me being his mother. His mindset, self-discipline and determination are the ’recipe’ for his development. And, of course, us as parents supporting him and being hard on him”.

Marqus confirms to me that his parents’ influence was huge in his development, as were so many of his other coaches, which he made sure to enumerate – “there have been many coaches which have helped me develop from a young age. Jesper Lundin, Sandra Marsenic, Kostka, Sam, Morten, Atilla, Adrian Moss, the coaching staff from the National team U18 and both of my parents who have coached me for many years”. Marqus was always the tallest player on his team, but that never stopped him from playing the point guard position and develop his handling, which clearly gives him an advantage now.

In April 2021, Marion made his debut in a professional setting, but only in the 21/22 season did he become a rotational piece for BMS Herlev Wolfpack, as a 17-year-old. He became a starter halfway through that season and arrived at the Under-18 Danish national team having already a full season of senior basketball under his belt. That tournament, though, was the turning point for him. “It was an amazing experience. It was my first official FIBA national team tournament. It was great playing against some of the most talented players in Europe”. It was there that he played against Elliott Cadeau, who he describes as the most difficult player he ever played against. “His speed combined with his skillset definitely challenged us as a team at the FIBA U18”.

BMS Herlev are right at the middle of the table, but have beaten Bakken Bears, the winner of the last 6 editions of the Danish Basketligaen, away from home. A game that saw Marqus Marion finish with 21 points and 13 rebounds, establishing him as one of the most talented players in the league, fresh off his 18th birthday. “The season is going pretty well. We have the youngest team in the league, but that has not stopped us from making some noise.”, tells me Marqus, who calls himself a “very versatile player that can do anything from the 1-4 position, offensively and defensively”. He adds that he has a “high motor, and am good teammate on and off the court”. Something that his current coach, Adrian Moss, attests to: “Marqus is a good kid and a good teammate, but is still very humble and extremely coachable.”, he tells me. Nanna, his mother, adds in that Marqus is a “really relaxed and confident person, even in situations where other people would be stressed and panic. Before big games or exams in school we can’t see or feel on him that he is nervous. I think that is a really good virtue that he has”.

His day, as Nanna discloses, is packed. He is a basketball player but also a student, so he has two practices per week before school and practices in the evenings, finishing with strength training. “Right now, I’m working with my skills coach on a lot of guard stuff, ball handling, shooting and finishing in multiple ways around the rim.”, says Marqus of what he has been doing in practice. His coach says that Marion is always in the gym working on his game and trying to get better. “His understanding of the game is very advanced for such a young age”. Besides all of this, Marqus still tries to have a normal life: “One of my main hobbies is playing Playstation with my friends. We mostly play Call of Duty, because the new one just came out. Other than that, I like going to the gym for a lift, watching sports, eating and sleeping”.

On the “if basketball wasn’t an option, what would you be doing” front, Marqus says he haven’t really thought about that since basketball has been a big part of his life, but soccer would have been an option. He looks up to Paul George, since “he plays the style of game that I like, very fluent and confident, combined with his skillset”.

All of the work Marqus Marion has been putting in has a goal in mind: getting to the NBA. “Marqus’ biggest dream is to become a pro basketball player and make it to the league. That’s his main goal right now. Basketball is his life”, his mother tells me. Marqus mentions that same goal or “getting to play for one of the best European teams”, adding that “In the future I want to look back at my life and career and see that I have made an impact worldwide”. As for short term goals, Marqus wants to finish his season in Denmark and then find the right college program to develop him the right way and he’ll take it from there. His coach, Adrian, believes that “If Marqus continues to work and develop, he could have a chance to play at the highest levels of basketball”. Nanna has the same feeling: “His ceiling can be as high as Marqus wants it to be, as long as he keeps working hard and believes in himself. There will be ups and downs on his way to the top, but we know that he has the ability to fight through it”.