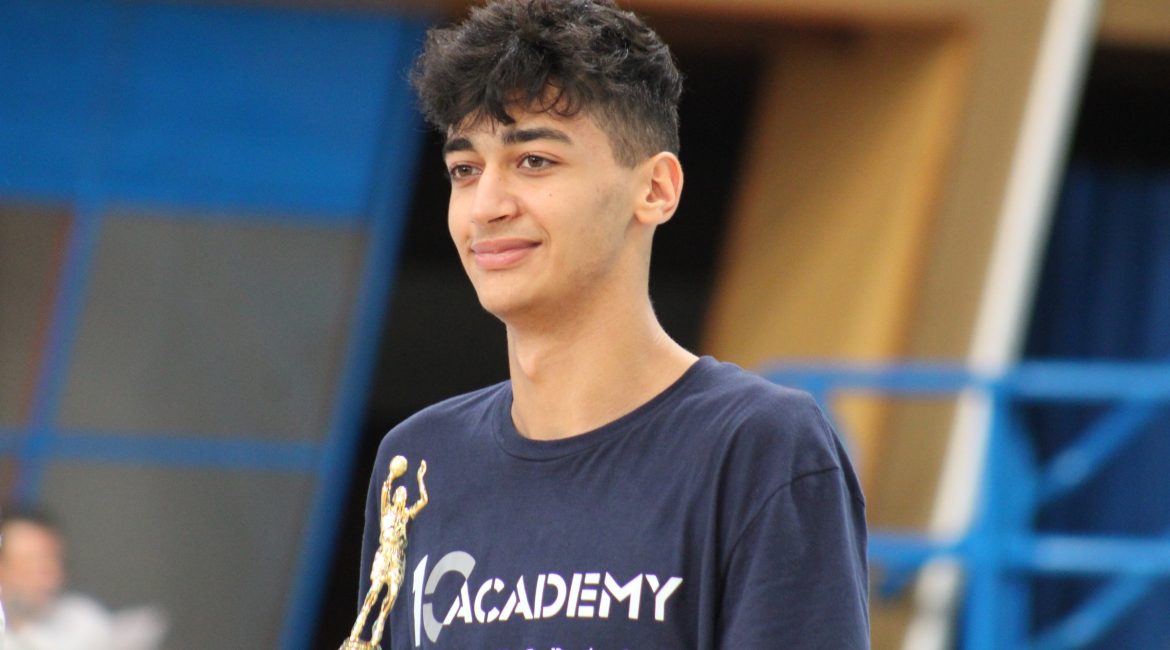 Born and grow up in Greece to Georgian parents, Samontourov joined 10 Academy at the age of 10. He has two brothers with the younger one, Aggelos (2008 born), also playing basketball. Former Greek player Nikos Chatzivrettas has been a mentor and a role model for him. Samontourov put himself on the map as Greece’s best long term prospect during the 2019 Greek U16 Championship where he averaged four points and three rebounds in twelve minutes, despite playing two years up at age 14. Fast forward in 2021 where Samontourov was the MVP of the Greek U16 Championship while also earning all-team honours at the Greek U18 Championships.

The first thing that jumps out when looking at Samontourov is his physical profile. At 6-foot-10 Samontourov has great size for a NBA power forward. His combination of size, agility and skill set give him tremendous upside considering he won’t turn 17 before April. He’s not a quick twitch athlete but he’s fairly mobile and gets up and down the floor very well, he has a frame that should continue to fill out, while also being an extremely fluid and coordinated player. He has considerably long arms that allow him to be factor on both ends of the floor. He could still stand to continue improving his frame, especially when it comes to adding strength, but his improvement physically from last season is apparent in terms of strength and agility.

What makes him standing out is the versatility he displays on offense. Even though he doesn’t possess an elite skill at this point, the upside is apparent when it comes to shooting the ball, passing and dribbling. Samontourov has nice hands and touch, but his jumper still needs work especially the speed of his release and the consistency of his form. Even though the ball comes easily off his hands, inconsistency leads to some streakiness which is evident by looking at the numbers from the three major Greek competitions he participated in over the last twelve months. He connected just on 18% of his 3s (70 attempts) where, on the other hand, he made 72% of his free throws (106 attempts). Even if the overall sample size of 70 attempts isn’t quite enough, it suggests that becoming a more consistent shooter will be a major key for Samontourov‘s ability to play on basketball’s biggest platforms.

Defensively, the 6’10 power forward moves his feet well and possesses great instincts as a shot blocker. He lacks a degree of strength and toughness on the block at this point, however he displays very good positioning and discipliness. He has the potential to hold his own at the next level, assuming his frame improves, given his ability to protect the rim, step out on the perimeter, rebound the ball at high level and use his length to play the angles.

Players with his combination of size, skills and basketball IQ are rare and that’s why he’d be heavily scouted this summer playing at the FIBA youth level with the Greek national team. Samontourov has attracted heavy interest from top Greek clubs as well as clubs from Europe and it’ll be interesting to see where he’s going to end up. He has the ingredients to turn himself into a legitimate NBA prospect as he continues to develop physically and polish his skill set.

In his own words

A: I believe some of my main strengths are reading the opposing team and making correct decisions, especially in critical moments of the game. Also, I can play good transition defense and protect the rim. The position that suits my game the most is Power Forward, as I can play away from the basket and close to it.

Q: In what areas do you need to improve to become more influential in your game going to a higher level?

A: There are a lot of areas that I need to improve when it comes to my game. To mention a few on the top of my head, physically, I have to get stronger, and technically, I need to improve my 1on1 defense and become more consistent on my shot.

Q: How helpful has it been to be close to Nikos Chatzivrettas, an athlete with Euroleague and Greek national team experience?

A: Definitely, coach Chatzivrettas has helped me a lot. He has shaped me as a basketball player and as a person, as I have been in his academy since I was ten years old. I’m still learning from him every day as he teaches me many valuable things. I am blessed for being around him for so long.

Q: What are your long-term goals? Is it the NBA and the NBA Draft?

Q: Would you be interested in the Next Stars program’s possibilities in Australia or the G-League Ignite or the Overtime Elite?

A: All these possibilities are intriguing. However, they are not in my immediate plans.