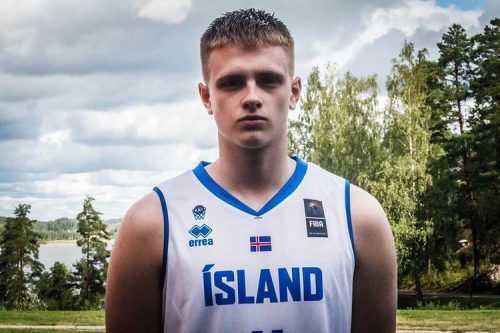 Over the last years Iceland has become an important place for prospects that have followed the college route. Plenty of recruits ended up in college just in 2021 whether at the D1 or D2 level with Styrmir Prastarson (Davidson), Aljaz Vidmar (Howard), Arnor Eythorsson (Toledo) among others. Atlason started playing basketball when he was four years old at KR Reykjavik and now at 17 he’s part of the senior team rotation. Atlason, currently a junior in Iceland, is a 6’8 220 power forward who had a positive showing at the U18 Nordic Championship thanks to which he was selected in the All-Tournament team and has cemented himself as an intriguing 2023 recruit to follow.

Atlason’s game mostly revolves around his ability to space the floor. His outside shooting is already solid with the potential of becoming even more lethal. Mechanics are extremely smooth and he can let it fly from deep range with ease. During the Nordic Championship, he showcased a pretty remarkable combination of mobility and skills for a big. He can be a dribble hand off big out on the perimeter or play pick and pop, especially when guarded by slower defenders who he forces out of the paint and attacks on close outs with his ball handling skills. Moreover, he displayed an intriguing vision when driving and kicking, as well as the ability to perform complex passes in the open court and creating open looks in half-court sets. Though he can’t be considered a vertical player, he has a good nose for the ball and instincts which allow him to rebound at a respectable clip. (Averaged 7.8 rebounds per game in 27 minutes).

Among the aspects to be improved are his lateral quickness and capability to slide his feet when isolated on an island. He’s far from being a switchable defender at this stage. Furthermore, he currently struggles to play end-to-end due to his poor conditioning and average quickness, it’s not rare to see him trailing on a play. Last but not least, adding some explosiveness on his last step when driving into the lane would help him finish against vertical defenders.

Atlason projects to be a stretch-four who generates gravity around him allowing drivers to have more space to operate. Moreover, his feeling for the game and passing skills make him a perfect fit in read and react situations, he can look for his shot as well as finding cutters. Even though Almar’s athletic profile is just average and doesn’t project to be a game changer on the defensive end, he still has lots of room for improvement to his body, conditioning and overall athleticism which he will need to boost in order to keep up with Division-I athletes. This being said, there aren’t too many bigs with his feeling for the game and shooting prowess. Therefore, his skillset should be tempting to quite a few of college programs.