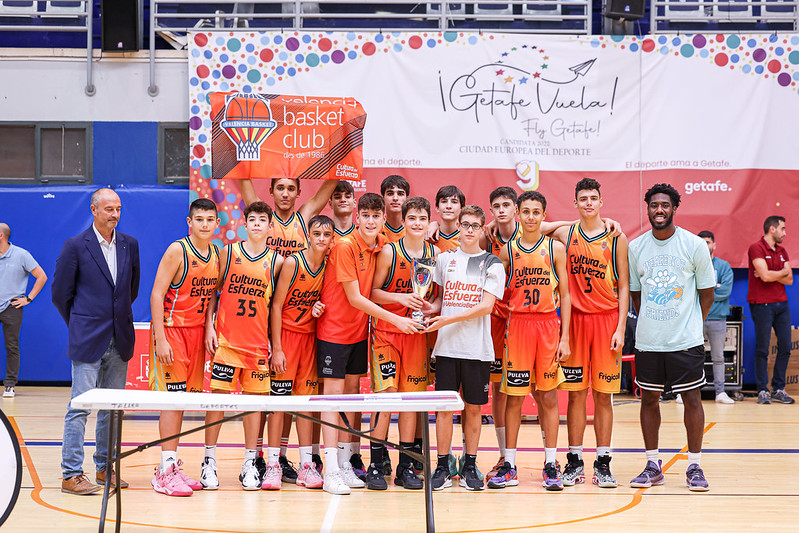 Over the past weekend, Getafe, a city on the periphery of Madrid, Spain, hosted the II Torneo de Canteras ACB, the first notable date on the calendar for the U14 Spanish basketball generation. Featuring three powerhouses in Real Madrid, FC Barcelona and Valencia Basket, notable ACB teams UCAM Murcia, Carplus Fuenlabrada and BAXI Manresa and a youth category staple in Movistar Estudiantes along with the hosts Aristos Getafe. The 4 day tournament was a resounding success, bringing together some of the better prospects in this age group and giving these young players an excellent opportunity to further their development in a strongly competitive setting.

Valencia Basket took the trophy home in a nail-biting final contest against FC Barcelona that went down to the very last possession. Real Madrid ended up in 3rd place, regaining their composure in their final game against BAXI Manresa after a convincing loss against Valencia Basket in the semi finals. French guard Ilan Laville from Valencia Basket earned MVP honours for his play throughout the tournament.

Eurohoops Scouting was able to attend the final day of the competition, getting a first glimpse at this 2009 generation. The next big date on the calendar is the Minicopa, a U14 tournament hosted at the same time and in the same location as the ACB’s Copa del Rey; for now, this tournament was a chance to get a first glimpse at the players on some of the Spanish youth level powerhouses, and these were some of the standout prospects.

Popovic was a guest player at this tournament, joining FC Barcelona for the 4-day stint in Getafe. A tall guard with an excellent frame, well-developed build and some very solid athleticism, Popovic looked like a different caliber prospect to other perimeter players here from a physical standpoint: he has a good frame, is fluid and coordinated for his size and can play through contact. He also looked technically sound, able to bring the ball up and execute straight line drives with ease, as well as taking jumpshots with clean looking mechanics over his defenders.

He looked a bit passive at times, but ultimately this makes sense for a 14 year old who was a guest player in this tournament, with first-time teammates and in a different country where everyone speaks a different language. His showing in Getafe was promising and we will have to track his next stop, whether it be at FC Barcelona or elsewhere.

A recent addition to the FC Barcelona system, Maker played only a few minutes in the final game vs Valencia. The upside is clearly there: Maker is a tall forward with length and mobility, although he is rail thin and his frail lower body will need to develop quite a bit before he establishes himself as an elite prospect. He had a high usage the minutes he was on the court, but his lack of strength limited him to jumpshots at this stage. The mechanics do look promising: he can shoot over his defenders with ease and the flashes do look excellent. He will need to keep developing this area of his game in the next few years as he keeps growing.

Already in Spanish National Team minicamps, Alejandro Ivorra was hugely impactful in this game. A tall and lanky guard with excellent coordination, he has a very interesting technical foundation as a prospect as he’s able to dribble, pass and attempt some tough finishes in the lane. On defense, his long wingspan and deceptive quickness allowed him to block three drives by standout Marko Popovic in one-on-one situations with the game on the line. Ivorra looked comfortable running the show for the title winning side, Valencia, creating offense and generally affecting the game with his positioning and movement. He will need to continue growing and developing his game, and especially his ability to generate offense for himself and others and his ability to score, but this was an excellent introduction on the national stage for him.

Vorontsov looked exactly like the type of elite prospect he was billed as: a tall guard or wing who can handle the ball and create offense. Vorontsov was physically imposing in this tournament with his size and athletic ability. He showed his burst here and used it to pressure the rim against Manresa en route to a blowout win; he also was generous in using his driving ability to set up easier finishes for his teammates or simply to keep the ball moving. He also wasn’t shy about taking plenty of jumpshots – his mechanics look good with a quick release and he was able to get them off without being affected by defenders here.

Laville earned MVP honours here in Getafe with an excellent all-around performance. A long-armed guard with good size and shifty, fluid athleticism, the French guard displayed his upside with the combination of physical gifts and his ability to generate advantages off the dribble. He showed a good range of spin moves and changes of direction here that allowed him to get by his defenders and make plays, and already had some craft finishing at the basket. By no means a finished product physically, we will keep monitoring his development in future years to see how far he can go.

A guard with good athleticism, Treserras was an electric player on offense, using his good handle and his speed to get by defenders and generate offense for a Manresa side that was outclassed in the semifinal by a bigger, more athletic Real Madrid squad. Treserras also displayed great technical fundamentals, attacking both left and right off the dribble, showing the ability to shoot stepback jumpers and displaying some interesting footwork inside the lane to create space for his finishes. He is also a willing passer, consistently making plays for his teammates when the defense loaded up against him, which was quite often in this setting. A fighter with character who did not allow the result to break his focus, Treserras has an interesting foundation for a guard and we look forward to monitoring his progress in the next few seasons.

Simply stated, small guard Manuel Veintimilla is a terrific shooter already at this level, and should only continue getting better. He showed fantastic accuracy in the final game against Barcelona, raining three pointers whenever he was given a glimmer of daylight and leveraging the defenders’ attention to drive into the paint or to move the ball for his teammates to score. Veintimilla is quite small now but is lanky and long-armed – definitely not done growing – and, with his outstanding shooting skill and scoring instincts, could absolutely be heard from later on if he adds a few inches.

Already present in the Spanish U12 and U13 National Team Minicamps, Oriol Filbà is simply an excellent all-around basketball player. A wing with excellent size and physical profile, he affected the game in multiple areas whenever he was on the court, as he has excellent positioning on both ends, reads the game well and can apply his athleticism both in the half court and in transition. He can also bring the ball up and even generate offense off the dribble, and is already a somewhat creative finisher, as he scored a couple of layups from tough angles in the final.

Yet another player who was selected for the Spanish U12 and U13 National Team Minicamps, Corta is an all-around wing with very good basketball instincts. His scoring game acts as an excellent complement to ball-dominant players, as he can score off of cuts, dumpoffs, offensive rebounds or running the court. More importantly,Corta is a great connector and a smart passer who plays excellently well within a system. It is more of the same on defense, where he consistently helped his teammates out, contributed on the boards and made good rotations.

Muñoz is a strong, burly big who played with intensity, hustling inside and willing to throw his body around on the blocks and helping his teammates. He was a good rebounder here who played within his role. What stood out from him is that he showed glimpses of the tools he will need to make the transition to the perimeter should he not end up having the necessary size to play inside the paint, as he was able to hit 3s and even left a couple of decisive drives off of closeouts. He was one of the better players in the final with his intensity, size, strength and scoring ability, and we will continue monitoring his development in the coming years.

Brought in this summer from Turkey, Karabulut looked gigantic here on the floor at the U14 level. At a reported 6’9 but looking perhaps an inch taller than that, with a plus wingspan and with some intriguing glimpses of mobility, Karabulut looked the part of a big man prospect. He was an intimidating presence around the rim on defense, but his minutes and touches were limited here by a lack of strength and by the very competitive nature of the setting. He will need to continue improving technically and tactically and filling out as he grows, but obviously time is on his side and he has the physical gifts to make an impact as he develops.