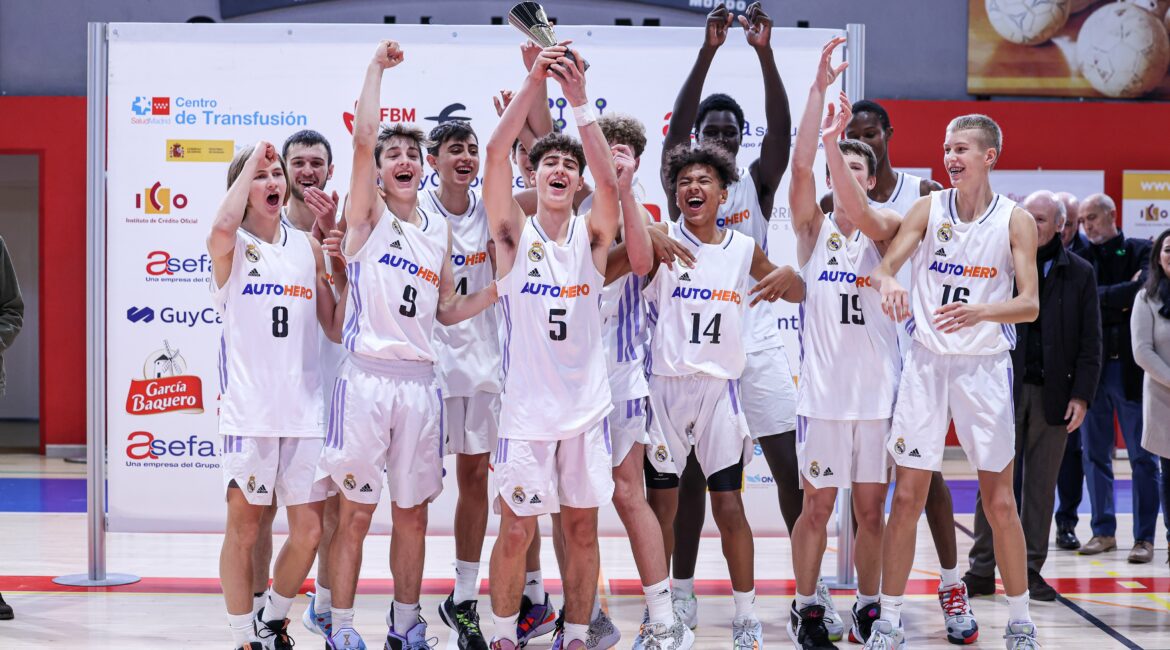 This past weekend saw the 12th edition of the U15 Torneo Fundación Leucemia y Linfoma, a marquee yearly tournament featuring several of the better teams in Spain and the first milestone in the U15 Spain basketball scene, with renowned past MVPs like Domantas Sabonis or Usman Garuba. In this edition, CB Canarias (the youth system of BCL and ACB team Lenovo Tenerife) and Valencia Basket joined Real Madrid as ACB clubs, competing alongside two competitive local teams in CB Alcobendas and Real Canoe and the regional Madrid U14 team, featuring a selection of the best players from all Madrid teams from the U14 category.

Real Madrid were the winners in a very close, gritty contest against CB Canarias in a repeat of last year’s U14 Club Championship final. The game went to overtime and finished 78-80, with Tenerife’s Babel Lipasi earning MVP honours after posting a dominant statline of 32 points and 27 rebounds. Valencia ended up in third place after a convincing win 96-49 over Real Canoe.

Eurohoops Scouting was in attendance for the tournament, monitoring the progress of the 2008 generation ahead of their next big date of the calendar at the Villa de Íscar Tournament in mid December, where some of this players will participate representing Spain U15. These were some of the standout prospects.

The unquestioned MVP of the tournament, Babel Lipasi was billed as the most dominant prospect in his generation and did not disappoint. A 6’9 C with excellent length and leaping ability, Lipasi was physically dominant. He was extremely productive here both scoring and rebounding, and his paint protection goes far beyond the numbers as his mere presence deterred anyone on opposing teams rom attempting rim finishes altogether. With his size, length and leaping ability, he already shows enough to be considered a pro prospect; he contributes on the boards, can block shots from the weakside and tries to dunk everything whenever he approaches the basket. However, he will need to keep working to elevate his status. He did experiment here attacking off the dribble and taking perimeter shots, but the results were only mixed, as his footwork, touch and comfort level all have room for improvement. On a Canarias team that did not have the perimeter talent that Real Madrid or Valencia showed, Lipasi single-handedly carried them all the way to overtime in the final; his competitiveness and athleticism really shined, and we will continue monitoring his progress as 6’9 bigs with his physical gifts don’t grow on trees.

A lanky 6’2 F who is clearly far from a finished product physically and will likely continue growing, Grinvalds shows an intriguing skill foundation for a forward in the modern game. He was perhaps the best shooter prospect in the tournament, with a picture-perfect and quick shooting stroke, a high release point and compact and repeatable mechanics. Far from only a shooter, Grinvalds showed confidence putting the ball on the floor for a limited amount of dribbles, cut intelligently off the ball and displayed some deceptively solid footwork, both preparing for the jumpshot off of movement and when finishing inside. He is still lacking strength and did get overpowered at times, but he has a good frame that should fill out in time and is a competitive player who plays hard on both ends. Already earning minutes for Real Madrid’s U16 team, Grinvalds should be one of the names to watch in this 2008 generation.

The best player on Real Madrid’s title winning team, Manu García came through in the clutch as usual and ended the final with 27 points. With a few accolades and great performances in his belt already at the ripe age of 14 (he was the MVP at the national U14 Torneo de Canteras ACB last year and was the best player in the Madrid regional team that won the U14 National Championship), García is an extremely productive player at this level. Although he still doesn’t look fully formed and may still have another growth spurt in him, his physical profile is excellent, as he is athletic, shifty and has a powerful lower body. His footwork and finishing ability in the paint is very polished, and he has a wide array tricks in his bag when he steps in the paint. He has even shown the ability to post up when teams match him with quicker, smaller guards to prevent him from driving, and he can also pull up from the midrange over defenders if need be. The big question mark in his case is the jumpshot, as his mechanics have ample room for improvement and he can be a reluctant shooter at times, showing a constant preference for drives over jumpshots.

He has been notably absent from any Spanish National Team MiniCamps and will again not be present this time round at Íscar, despite his accolades at a club level. He is consistently earning playing time with Real Madrid’s stacked U16 roster, and he will obviously be a prospect to watch as he continues developing.

The dominant ball handler for finalist Cajasiete Canarias, Pedro Pasqua shows an intriguing profile with polished skills to go along with a deceptively athletic physical profile. Listed at 6’1 but looking lanky and far from done physically, Pasqua showed here that he could compete with some of the better guards in Spain. His handle isn’t flashy but is very functional, and he showed some flashes of creative footwork when finishing inside, along with some strength to carve out space to attempt his finishes. He was also a willing shooter, although he did display a clear preference for driving at this stage in his development. A vocal player on both ends who regularly brought the ball up and organised his team’s offense, his physical development will be key to his upside.

Valencia’s all-around best player here and already a staple of Spain National Team MiniCamps, Javier Viguer is a 6’5 wing player with a mature body and game. He is broad and strong and combines that with deceptive speed, especially on the ball, and dribbling and shooting skills that allow him to face up and generate some offense. He was one of the more productive players here, scoring inside with ease, and he will likely continue being one of the more productive players in his age group in Spain during his whole U16 stint. He does have some explosiveness limitations, though, and he will have to work on his counters when facing up, on developing his passing game and on diversifying his finishing craft as he did become slightly predictable. Since he is the tallest and strongest player on Valencia’s roster, he is regularly matched up with big men on the defensive end, and does a solid job bodying them up and being physical both when defending the rim and on the boards. It would be great to see him in a different context playing on the perimeter full time, and we may get that chance in the Íscar tournament in December.

Listed at 6’2 but perhaps already 6’3 or even 6’4, Rodrigo García is a toolsy wing prospect with an intriguing combination of physical gifts and skillset. Sporting a good frame but still far from physically mature, García moves very well for a wing player his size and who may not be done growing: he is agile, coordinated and athletic. Playing on the perimeter full time for Valencia in this setting, García showed the ability to get low to dribble and explode, and to run the court hard and contribute in transition. He showed some promising dribbling skills getting into the paint, although he is still raw and will need to continue working on that aspect of his game to establish himself as a legitimate perimeter prospect. Also absent from any National Team Minicamps so far, García shows clear flashes and wing prospects are rare and valuable in today’s game, so we will continue checking in on him at future occasions.

A key addition to Real Madrid’s U16 team this summer, 6’2 G Marcos Zurita was one of the very best players on the floor in Madrid this past weekend. More of an off guard than a pure point guard, Zurita has a polished offensive arsenal and can do damage to opposing defenses in a variety of ways. His jumpshot has excellent mechanics and he even took (and made) two impressive off the dribble ones with crisp footwork and balance. He can also drive both left and right and has some craft finishing inside. More importantly, he was very under control here, not forcing things, not turning the ball over and playing a mature game. Physically, he is long and lanky and looks far from a finished product, and he may even have an inch or two left to grow. He has been on the Spain National Team MiniCamps at every stage of the way, and we will get to evaluate his performance against older players in the ‘07 generation next month in Íscar as well.

On a Real Canoe team that was outmatched here against the ACB powerhouses, Miguel Álvarez stood out as an athletic guard with positional size that showed some flashes. Listed at 6’1, Álvarez has a powerful lower body that he was able to use to get by defenders. He had a good first step, accelerated really well in short spaces, was able to use his lateral quickness to stay in front of opposing guards and just looked athletically a notch above all but the very elite players in this setting. His team, Canoe, didn’t really have the players to compete effectively, lacking inside finishers or much in the way of perimeter shooting, and Álvarez did not really enjoy the spacing to take full advantage of his athleticism. The flashes were impressive in any case, and we will keep monitoring his progress.

Playing two years up in competition, Moussa Baptiste (2010), a recent arrival to Real Madrid’s system, is a 6’9 big man with eye-popping physical tools. He is extremely long and thin but has a good frame that should fill out in time, and showcases excellent agility and mobility for his size and age. Although he showed awareness and positioning and displayed some passing flashes too during the tournament, he was overall quiet offensively in this setting, playing within his role and barely attempting shots at all. However, his size and mobility were on full display here and he made several impressive verticality plays against the much more physically mature Babel Lipasi in the final. It’s obviously early in his development, but he is absolutely a prospect to monitor as big men with his size, length, mobility and awareness are rare findings. He is in a great development system in Real Madrid and is earning regular minutes with the U16 team already, playing three years up in competition, so we will surely hear more from him in the future.