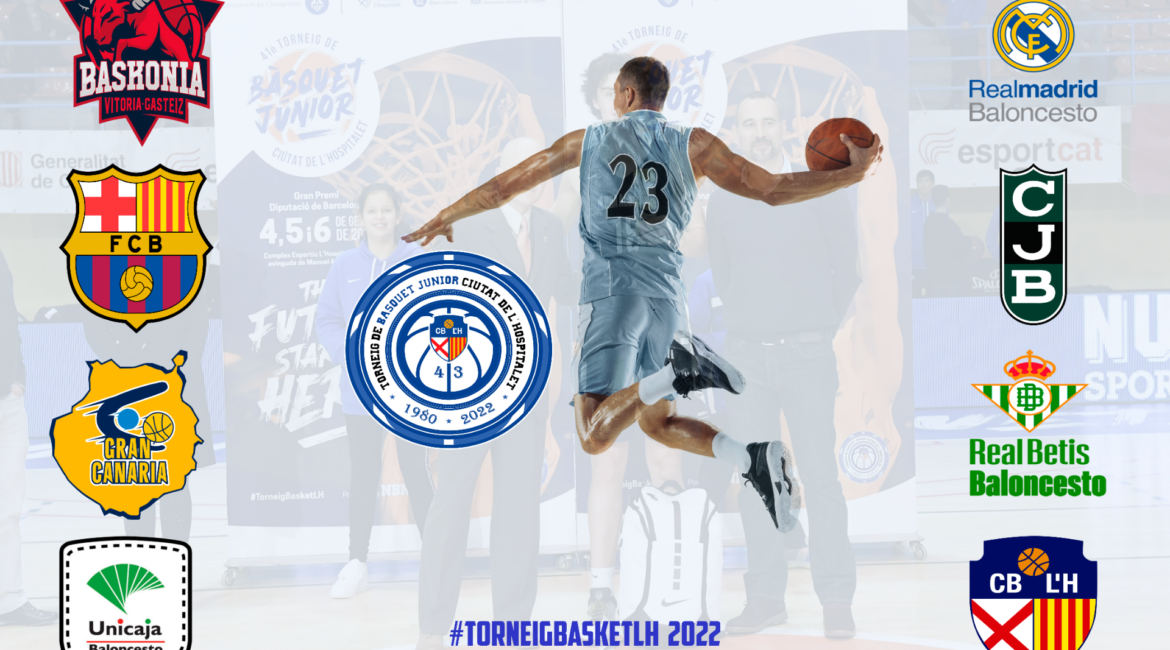 The yearly Torneig de Bàsquet Junior Ciutat de L’Hospitalet features several of the best U18 squads in Spain, including Real Madrid, FC Barcelona, Joventut Badalona or Unicaja Málaga. Missing only Valencia (Sergio de Larrea, Lucas Marí and Pablo Navarro, all playing in third division LEB Plata with Valencia’s affiliate team) and Zaragoza (Aday Mara and Lucas Langarita, both with the ACB team) from the top-tier Spanish clubs for this edition, L’Hospitalet is one of the more prestigious tournaments in Europe, having seen a host of now NBA an Euroleague players in attendance in its more than 40 years of history. After 12 games in the two days of the group stage, the semifinals are set: Unicaja Málaga will face FC Barcelona at 10:00 tomorrow, and then Real Madrid will face Fundación 5+11 Baskonia at 12h00. The winners will then play in the tournament final at 19h30.

As usual, we bring you here the Top Performers of Days 1 & 2.

The unequivocal leader on a Joventut team that was missing its best prospect, Portuguese big man Ruben Prey, Conrad Martínez looked every bit the dominant point guard that he hinted at becoming during this past summer’s U17 FIBA World Cup despite Joventut’s disappointing results. With an excellent handle, sudden but measured changes of speed and direction and a great court-mapping ability, Conrad Martínez is simply a pick and roll maestro that plays the game with the pace and savvy of a veteran. He picked apart Real Madrid’s defense, manipulating helpers with no-look passes and finding shooters dotted around the perimeter, and he would’ve had a higher assist total if Joventut’s shooters had converted on their chances. When he chose not to kick the ball out, he went hard to the rim, finding angles to either attempt finishes over or around Real Madrid’s bigs or forcing his way to the free throw line like a long-time pro. He regularly plays in LEB Plata for Joventut’s affilliate team, CB Prat, and his experience level showed here as he was unfazed by the pressure and athleticism of Real Madrid.

A tall and long wing player with an excellent skillset to match his intriguing physical profile, Aleksandar Savkov put on a shooting display in the first half of the game against FC Barcelona. Firing away at the smallest sliver of daylight, Savkov took his jumpshots in the most varied manners, whether it be catch and shoot, off the dribble or even coming off screens, and took a few from really deep range. He also used the threat of his jumpshot to then drive into the paint, finishing with craft and using his length effectively at the rim. While not a dominant ball handler, he is flashy and effective in getting by defenders and was able to do so and then generate shots for teammates as well when Barcelona’s defenders helped aggressively. Savkov has had a very intriguing tournament so far, and it will be interesting to see him against a tough, stacked Real Madrid team in the semifinals tomorrow.

One of the headliners of the tournament and arguably FC Barcelona’s top prospect, Dame Sarr showed here all the aspects that have scouts intrigued. Listed at 6’6, Dame Sarr has an elite physical profile, with great length, burst, strength and body control. His straight line drives are a constant threat to the defense, and he used that threat here to capitalise as a shooter, knocking down 4 out of his 5 attempts from the perimeter. He has deep range and his form is very projectable to the highest levels, and his athleticism alone allows him to get it off and elevate over opponents with ease. He will have a tough test tomorrow in the semifinal against Unicaja, and a potential final against Real Madrid, should they both make it through their morning rounds, would be a great chance to evaluate him against top-level athletes.

With good size, strength and athleticism, 6’10 C Seydina Limamoulaye gave FC Barcelona problems all game long. Taking advantage of Barcelona’s lack of depth at the big man positions —6’6 Dayan Nessah played some C in the tournament—, Limamoulaye feasted inside, carving out space with his wide frame and then exploding for finishes and rebounds. Limamoulaye has solid leaping ability, especially given his size, and showed good touch and awareness for finishing here. He also displayed some intriguing shooting mechanics and even made a few midrangers, setting up glimpses of a faceup game that could be effective against slower opponents. He did well here against an undersized FC Barcelona side, but will face a much tougher challenge tomorrow in the first semifinal against Real Madrid and its big man rotation.

In a must-win game against a Joventut Badalona team that, despite missing headliner Rubén Prey, was still the favourite coming in, Álvaro Fernández ‘Mena’ came up big with a near triple-double and secured Unicaja’s ticket to the semifinals. A bit of an under-the-radar prospect as he has not consistently been with the National Team and has been absent from ANGT Select teams as well, ‘Mena’ is a 6’3 PG with a wide-ranging skillset and ability to impact the game, as his statline here suggests. He has good length and a smooth athleticism that allows him to put pressure on the defense and get to his spots, and he made good use of it here to simply make things happen on offense against a good Joventut squad. He is already quite polished – he has experience this summer with Unicaja Málaga’s first team, and it shows in his ability to handle pressure and contact. He will have a tough test tomorrow against FC Barcelona’s athletic backcourt, and that will give us another chance to assess his performance against tougher, more physical opponents after having a quiet game against Real Madrid on Day 1.

Real Madrid have such a deep rotation that it is hard for any one player to end up with a dominant statline, but Jan Vide had himself a great scoring game here against Joventut. Vide is a known commodity at this point, as it seems like he has been around forever. He remains a dominant U18 player, with a chiseled frame that is clearly ready for tougher challenges and a very mature and polished game, able to score from the midrange and the rim with excellent touch and with a very controlled, low dribble game that meshes well with his scoring toolkit. His footwork was crisp tonight, dropping a couple of eurosteps at the rim to avoid defenders, and he overall completed a very solid, Jan-Vide-esque game here ahead of the semifinal tomorrow.

On a Gran Canaria team that looked outmatched without a couple of its top prospects, big man Nazarii Kulischenko was the lone bright light. The 6’10 C used his strength and craft to finish plays around the rim and to generate some offense, mostly from the low and mid blocks. While his statline may not look outrageous, he was able to have an efficient scoring night against a Real Madrid frontcourt with several high-caliber prospects and was the only player on Gran Canaria’s squad that did not look outmatched against a dominant Real Madrid squad, scoring 17 of his team’s 38 points in this game.

In a somewhat weak tournament for a Real Betis team that never really put it together, Gonzalo Fernández’s last game was a very clear bright spot. The 6’6 guard, a key rotation player on the Spain U16 squad that earned a silver medal this past summer, looks very much on track. With a wide frame and stocky build, González nonetheless has a low centre of gravity and can use that to his advantage when attempting to create off the dribble and get to the rim. He knocked a few of his perimeter shots here —a key aspect in his development as he was sometimes a reluctant shooter over the summer— and he looked very much in control and comfortable with the level of physicality here despite playing up a year.

After a quiet first half, Dayan Nessah came through in the final quarter of a competitive, high-stakes game against Baskonia. Nessah, a 6’6 stocky guard with athleticism and a foundation of skill, was pretty quiet for most of the game but exploded in a hectic ending. In a game where Barça trailed by 17 points, Nessah fuelled a comeback, scoring 10 points and grabbing 5 key rebounds in the fourth quarter and playing with an energy and intensity that helped swing a very close game. At 6’6 and with an intriguing baseline of physical talent and skill, Nessah still has this year and next remaining in his U18 stint, and his progression when shooting, generating offense and applying his athleticism will ultimately be key to his development.

A lanky but undersized big man prospect, Arnau Rosa was instrumental in CB Hospitalet’s only win in this tournament, against Real Betis. Rosa is an active, smart player who knows how and when to cut to generate passing lanes and space, and who has good touch on layups and inside finishes to pair with that. He isn’t the tallest or springiest of players, but he is coordinated and agile and looks to have good length, and was able to produce here against a much more highly-touted frontcourt. A homegrown player for host team CB L’Hospitalet, Arnau Rosa was surprisingly effective here against top-level national competition.