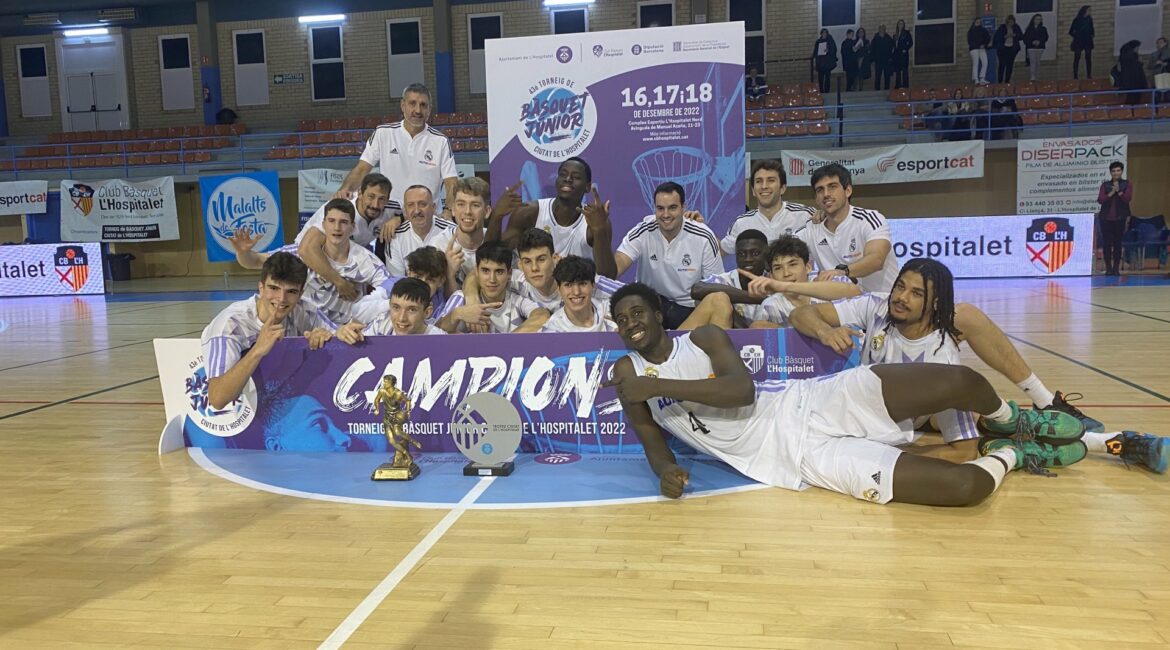 Yesterday was the final day at the 43rd Torneig Junior Ciutat de L’Hospitalet, the U18 International Tournament in L’Hospitalet, a marquee date in scouting calendars in Europe. In the morning games, FC barcelona outlasted Unicaja Málaga in an epic 2006 generation showdown between Barcelona’s Dame Sarr and Dayan Nessah and Unicaja Málaga’s Mario Saint-Supéry, the MVP of this past summer’s U16 tournament. The game went to overtime, with Dame Sarr scoring a 3+1 with 1 second left on the clock to secure FC Barcelona’s presence in the final. On the other side of the draw, Real Madrid’s depth and talent kept giving them the edge, as they comfortably beat a feisty Baskonia team with several high-level prospects by 99-60. With hosts CB Hospitalet beating Gran Canaria out for the 7th place and Real Betis taking the 5th place game against a disappointing Joventut side where notable prospects Ruben Prey and Dwayne Aristode did not play, the scene was set for the youth team Clásico between Real Madrid and FC Barcelona, the only two undefeated teams in the tournament. In the final, despite a competitive first half from FC Barcelona, Real Madrid’s depth and talent ended up proving too much to handle even for the Catalan powerhouse, as Real Madrid were crowned champions with a 73-53 win fuelled by their second half defense.

These were out top performers for the final day at L’Hospitalet. As a reminder, you can read our Top Performers from Days 1 & 2 here.

After recovering from a nasty fall yesterday that could’ve kept him out of the final day, Hugo González picked up right where he left off with a very complete statline in the semifinal and the final. Real Madrid is a stacked squad, perhaps one of the better U18 rosters ever assembled in Europe, so the scoring load is quite spread out. Hugo nonetheless finds ways to contribute, scoring in transition, off of cuts, in spot up situations, pick and rolls and occasionally generating through straight one-on-one if need be. His athleticism, size and skill are overwhelming at this level despite playing a year up, and he is firmly cementing himself as a name to watch for the NBA draft whenever he chooses to declare. He earnt an All-Tournament Team bid despite Real Madrid limiting his minutes and spreading the scoring load among their multiple perimeter generators, and this very accurately represents his impact on the game whenever he was on the floor.

In the closest game of the whole tournament and a high-stakes situation, Dame Sarr came through with an excellent performance in the semifinal, where he showed all his intrigue as a prospect. On the offensive end, he scored mostly using his jumpshot, both from beyond the line and from midrange. His leaping ability and form allow him to elevate over defenders, and Unicaja’s wings struggled to contest his shot effectively. On defence, he uses his length, strength and lateral quickness to contain Mario Saint-Supéry’s drives, forcing him to settle for contested jumpshots or find a way to screen him off and attack other defenders. Of course, he came through in the clutch, as he forced overtime with a key steal stopping a one-on-one drive from Saint-Supéry and then won the game at the buzzer with a 3+1 when they were down 2 with 11 seconds to go.

The best floor general in the tournament and the lone bright spot on an otherwise disappointing Joventut side, Conrad Martínez carried on with his stellar play against Real Betis in the 5th place game. He looked a play ahead everyone else on the court, making some beautiful pick and roll reads, cutting through the defense for very incisive drives and attacking his defenders’ hips to draw fouls and head to the free throw line. His experience level and talent was on full display here, and he very much earnt his All-Tournament Team selection with his play in all 4 games this year.

Seydina Limamoulaye continued his impressive tournament by putting up a very strong game against Real Madrid’s stacked frontcourt. He went neck-to-neck with Ismaila Diagne, a 6’11, physical C with high-level experience who might develop into an NBA prospect in his own right, and was able to score efficiently with inside finishes and faceup attacks. We wondered yesterday whether Limamoulaye could replicate his strong play against tougher opposition in Real Madrid’s C rotation, and the answer was a resounding ‘yes’.

After a quiet tournament, the MVP of the U16 FIBA European Championship Mario Saint-Supéry finally made his presence felt with an explosive scoring outburst in an overtime loss in the semifinals against FC Barcelona. In a game where all the other scoring options for Unicaja seemed to be run out, Saint-Supéry went deep into his bag of tricks, using his first step, long strides, elevation and touch to generate scoring opportunities. He complemented that with a good shooting game, finishing with 3/6 from range, and his performance against a deeper FC Barcelona squad was close to earning Unicaja a ticket to the final.

Bosnjakovic had a remarkably consistent tournament, hovering around the 12-14 point mark in almost every game on a steady diet of spot up 3s, transition layups and inside finishes. His business-like approach, with a game that is all substance and no flash, works wonders on a team full of perimeter generators – when Egor Demin, Jan Vide or even Hugo González handle the ball and make things happen, Bosnjakovic simply spaces the floor, firing on the catch with a really quick release or attacking the closeout with a quick, powerful straight-line drive. He makes very few mistakes, makes quick decisions and overall plays an excellent complementary role for a winning team, all while battling with opposing power forwards inside, usually facing a height and weight disadvantage but usually containing them really well. Bosnjakovic earnt an All-Tournament Team selection here and deservedly so considering how useful his role is and how effectively he has carried it out in L’Hospitalet.

Arnau Rosa once again was the best player on the host team CB L’Hospitalet. Facing an ACB youth team here in Gran Canaria, Arnau Rosa put up a great statline while earning the win. He continued showing touch inside the paint and added some perimeter jumpshooting to the mix, as well as contributing both on the glass and by directing traffic and moving the ball to the tune of 5 assists – a great number for a big man in a setting like this.