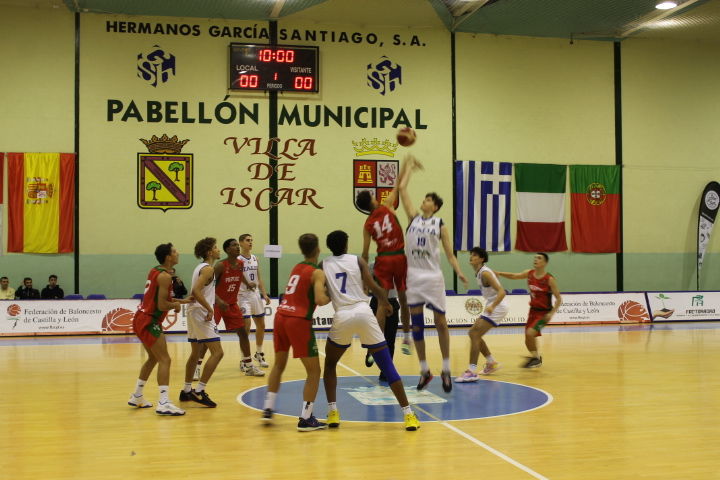 Day 3 of the Íscar International U16 Tournament was supposed to feature games between Italy U16 and Portugal U16, which the Italian team won comfortably with a final result of 85-69, and Spain U16 against Greece U16. However, the Greek side, impacted by several cases of non-covid illness and flu symptoms both before and after the trip to Spain, had to withdraw from the tournament altogether. Instead, Spain u16 faced Spain U15 in a game that stayed competitive until halftime, but that the Spain U16 side ended up winning 85-66 in a dominant second half.

We recap the top performers of the Day here. As a reminder, you can read our tournament preview here and our review of the Top Performers of Days 1 & 2 here.

Maikcol Perez was firmly in the ‘Players to watch’ category of our preview, and for good reason: he was dominant today against a Portugal side that simply lacked the physical prowess to contain him. He only played 15 minutes, mostly in the first half, but it was enough for him to pummel Portugal inside the paint, putting pressure at the rim constantly with his strength and athleticism and overpowering his opponents. 6’7 forwards with wide shoulders and a chiseled frame don’t grow on trees, after all, and Portugal just didn’t have anyone who could match up with him, as he scored most of his points on right handed drives or finishes inside the paint.

His physical advantage at this level is very clear, and it will take a team that can either match his athletic abilities or set up a solid help defense to slow him down. Luckily for us, Spain’s U16 side can pull both off, at least on paper, so we will have ourselves an excellent matchup tomorrow evening.

With a reputation as great shooter, Andrew Figueira, a lanky and skilled guard with speed and athleticism, performed extremely well here against Italy after having an uninspired showing against Castilla y León on Day 2. Against Italy, a team with several athletic and strong guards in Hassan, Carneval, Granai, Mathis or Lonati, Andrew Figueira looked extremely comfortable creating off the dribble. He was able to find gaps in the defense and slither through any openings, sometimes getting to the rim too fast for help to arrive on time, and other times using the threat of the drive to set up his jumpshot. A scoring performance like this one against a side deep in athletic wings with ability to defend is impressive, and we will have to monitor Figueira’s progress in the future.

A late addition to the National Team dynamic in Spain, newcomer Máximo García-Plata, who did not make the roster for Day 1, made his entrance with a bang, scoring 14 points in 14 minutes and looking like the best or second-best perimeter generator on a Spain U16 side that isn’t exactly swimming in one-on-one talent. Despite not making his 3s today, García-Plata showed what makes such him a challenging cover: despite standing only 6’2, he is sturdy, mobile and plays low to the ground, combining that physical profile with a good handle and vision, and some creativity in his passes and his finishes. He pulled out his trademark spin move not once but twice here, and overall looked comfortable attacking from one-on-one situations to generate advantages for his team.

Tomorrow will be a completely different test, though, as Italy’s roster is stacked with strong, athletic perimeter defenders who are far better equipped to deal with players like García-Plata, so, again, we will have a very interesting matchup on our hands – if indeed García-Plata gets on the roster in the first place.

Caetano was one of our top performers on Day 1 as well after looking quite comfortable manning the guard spots for Portugal against Spain’s U15 team despite the loss, but we wondered what he would look like against tougher competition. Well, tougher competition arrived and Caetano still looked very impressive, handling the ball with confidence and security against Italy’s pressure, calling the shots in Portugal’s squad and complementing that with some scoring of his own. His shooting mechanics are unconventional but seem effective, and his speed and his athletic build allow him to probe inside, create advantages and then kick out to open teammates.

He has had a very solid tournament, and he will be another name to keep track of in the future.

After leaving interesting flashes in the first two games, Darío García finally had a more solid game this time round, with his shots falling at a decent clip and allowing him to capitalise on the opportunities he was generating. Standing somewhere between 6’2 and 6’3, but with no listed measurements available, García has very long limbs and may still be growing. He already has a shifty sort of game, changing speeds and directions easily and impacting the game in several ways with his length, speed and smarts. Spain U15 is filled with lanky, athletic wings, but García stands out because he is used by the coaching staff as a primary generator, tasked with bringing the ball up, calling plays and making things happen whenever Nicolás Marina, the starting point guard, sits. His length, athleticism and awareness allow him to contribute on defense, getting deflections and blocks, and on the glass too, which he did here with a whopping 13 rebounds – an incredible number for a guard.

Playing for the nearby CB Tormes in the historical city of Salamanca, García is one of the few players on Spain’s U15 side that is still not a part of one of the big ACB systems, and it wouldn’t be a surprise to see him move next summer as he furthers his basketball career.