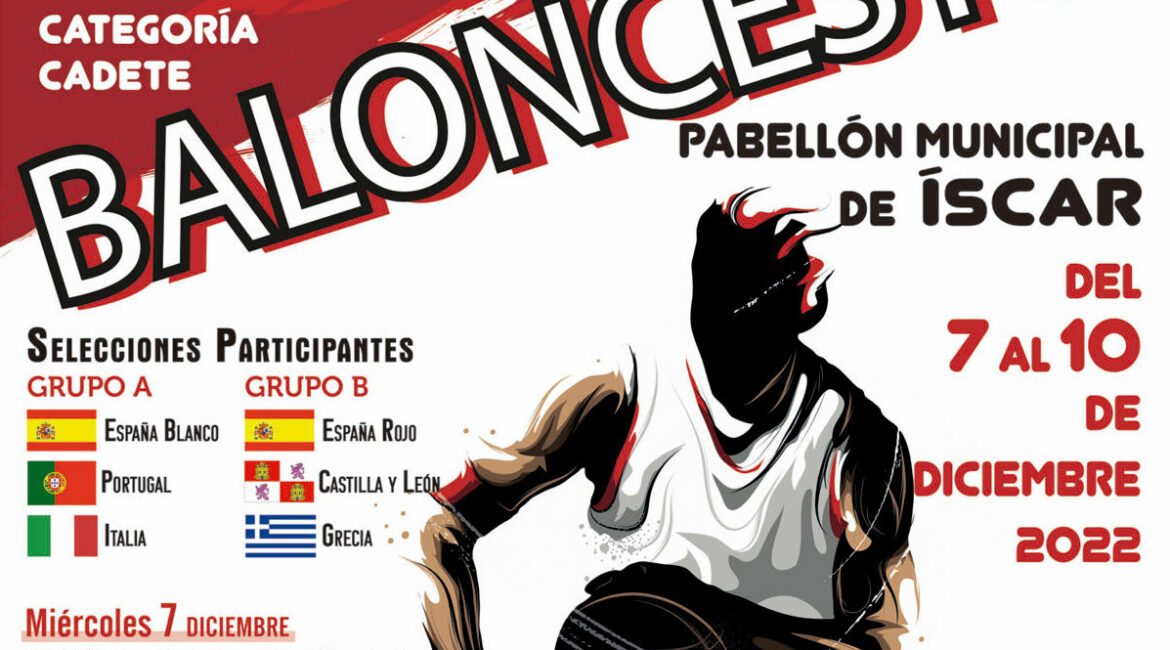 One of the biggest dates in the European scouting calendar at the U16 level, the yearly Villa de Íscar tournament returns for its XXV edition and it comes with a bang. Rather than its customary 4 teams, Íscar is backpedalling to its older format with 6 participating sides: Greece, Italy, Portugal, Spain Red, Spain White and a regional select team of Castilla y León U16 players. The two Spain teams will presumably feature a mix of their 2007 and 2008 generations, both of which are holding a MiniCamp since this Monday all the way through to the end of the tournament.

The Íscar tournament has in the past served as a coming out party of sorts for a few of the now marquee prospects. Last year’s edition saw Hugo González and Mario Saint-Supéry step up their play and definitively separate themselves from their peers; past notable performers include Jordi Rodríguez, Davide Casarin, Usman Garuba, Ricky Rubio, Luigi Datome, Marc Gasol, Enes Kanter or Rudy Fernández. The games will on Wednesday, when the Spain U16 team will face the regional select team at 13h00 and Spain U15 will play Portugal’s U16 at 16h30, and will continue all the way to Saturday evening, when the final will be held at 19h15.

There are plenty of interesting prospects to watch and part of the joy is simply to keep an eye on their progress and see who can surprise us. That being said, these are a few prospects that we will be particularly looking forward to watching.

The biggest name in a Spain list that perhaps lacks the very top-of-the line star talent from past seasons (no Juan Núñez, Hugo González or Mario Saint-Supéry), Alberto Blanco looks like an excellent wing prospect in his own right and will likely be the go-to player for the Spain U16 squad. With high-level experience having been a key rotation player in the U16 European Championship this past summer playing a year up alongside the aforementioned Saint-Supéry and the rest of the silver-medal Spain team, Blanco is an all-around wing with pristine decision-making and some flashes of offensive self-generation. He has the ability to play in both forward spots, can knock down perimeter jumpshots with good form and can drive to the rim using his agility, solid handle and long strides. He has shown some glimpses of off-the-dribble creation this very year in the U16 international tournament at La Orotava, and the next step in his development will be to show some more of that in this setting as he eases into a more prominent role on this team for the upcoming U16 European Championships.

An extremely dynamic shot-creator, Adrian Mathis is an athletic and technical marvel. He is fast, shifty and has excellent body control, and the form on his jumpshot is solid. He is particularly polished when getting to his midrange pull-up, which he can likely do rather easily against most defenders in this setting. While having below average size for a wing (listed at only 6’1), Mathis needs to keep developing his generation skills and passing to be able to at least be playable as point guard and maximise his upside at the next level. His matchup against the really good Spanish perimeter defenders Gildas Giménez and Raúl Villar, should it happen, will likely be one of the biggest challenges he can face at this age level.

Manning the paint for an uncommonly tall Spain team with several players above the 2,00m mark, Nicolás Gómez will likely be his uber-productive self on the inside. Gómez simply gets numbers quite easily: he is tall, long, mobile and agile and has good touch and footwork inside, and at this level that simply makes him a great finishing target and a rebound magnet. He’s also experienced, playing up in age this past summer at the FIBA U16 European Championships as a rotation big and earing regular minutes already for Valencia’s U18 team. He will need to keep developing both physically and technically if he’s to continue being this productive as competition toughens up with age – and Íscar is as good as setting as it gets to check in on him too.

Perez has a track record of early-age success, participating already in the Jr NBA Camp this past October and being the cornerstone of Orange 1Bassano’s programme in the present. An athletic marvel, Perez stands out with his athleticism and strength, slashing to the rim effectively using his powerful lower body and long strides to beat his man, and crashing the boards and scoring second chances by carving out space inside. In his last international outing against this level of competition, Perez was outplayed by Real Madrid’s stellar frontcourt of Sidi Gueye and Declan Duru at La Orotava’s U16 tournament this past September. He won’t face anyone quite that physically imposing here in Íscar, so he will have a chance to showcase more of his strengths in this setting and we may see a dominant performance from him.

Niebla comes heralded as perhaps the best prospect in the 2008 Spain generation and the next big wing prospect in the Iberian country. With good size, length and frame, it’s his impressive athleticism that separates his from his peers. He is fast and has a good first step, as well as solid agility and body control when dribbling and finishing. He will be playing with the Spain U15 side in Íscar, but doesn’t really look a year younger than the competition, instead matching up well with wings a year older, at least physically. He complements this physical profile with a good ability to rise for pull-up jumpers, whether after attacking a closeout or in fadeaway fashion. Having moved to Joventut only this year from his hometown club Basket School Ferrol, Íscar will be an excellent test of his abilities against older players from top-level teams and another step in his development.

With intriguing physical tools and a promising blend of skills, Patrick Hassan is a high-upside player. He’s a physical player at his size with good length and explosiveness, and has a good, compact stroke to go with it, getting good rise and a consistent release whether he shoots off the catch or off-the-bounce. He isn’t the biggest player, but he does have a knack for getting to his spots on the court, although his improved ball-handling will be tested here against high-caliber perimeter defenders, especially on the U16 Spain team. He had a secondary role in the Torneo de la Amistad last summer against similar competition, so Íscar will be a good benchmark to check on his progress as a generator.

Gildas Giménez, a 6’4 wing for Real Madrid’s U16 squad, stands out as of now as a prospect with a high role-player potential – and perhaps some upside on the top. With movement patterns reminiscent of the Garuba brothers, Gildas is a lockdown defender with the ability to wall off even the best perimeter generators in his age group. He couples this with intelligent decision-making, a respectable jumpshot and, increasingly, some flashes of dribble creation that don’t look all that pretty but are remarkably effective. While not an explosive athlete either changing speeds or leaping, he is smart, strong and has very good length, and has been shouldering more responsibility offensively at Real Madrid in the last few months. Íscar will be a good test for Gildas’ new skills against high-caliber competition within his age group, while providing further opportunities to see him matched up on defense against some of the better perimeter generators in the continent.

A late addition to the National Team dynamic as he was not present in the previous MiniCamps or in last summer’s roster for the U15 Torneo de la Amistad in Melilla, Máximo García-Plata has quietly become an interesting wing prospect. He is perhaps the best player in Estudiantes, a former youth team powerhouse who now plays second-fiddle to Real Madrid in Spain’s capital. García-Plata is a a 6’2 G with a big body, broad shoulders, the ability to play low and good agility and body control, as well as the dribbling and shooting abilities to go with it. It will be interesting to see his fit with other, more skilled and dynamic players, to get a glimpse of what his upside can be in a more off-ball role.